On the Mdex official website, there is already an entrance for the DAO. Before that, the Mdex Boardroom was revamped to pave the way for the Mdex DAO.
What can Mdex achieve through the DAO?
The concept of the DAO (Decentralized Autonomous Organization) originates from the DAC (Decentralized Autonomous Corporation), which aims to disrupt traditional corporate structures and allow it to operate transparently and flatly.
The bases for companies are  they provide quality products and services at a competitive cost structure. This economic explains why people is willing to give up their individual freedom and to unite for better  efficiency.
The emergence and existence of the Mdex DAO is for the same purpose. It allows stakeholders to take control of the future of the Mdex and to make it better and more efficient.
In the future, the Mdex DAO will be in charge of all matters, big or small. The prerequisite for joining the Mdex DAO is a lock-in pledge on the boardroom. Locked-in MDX community users are the group with the most stake in the Mdex development. As a result, putting governance in their hands brings the best decision-making team to the Mdex.
For the Mdex DAOs, lock-in participation in governance is not only for their long-term benefit, but also providing incentives for governance and incentives for lock in as a ‘reward’ for exercising their management responsibilities.
When a user locks in an MDX position on the boardroom, they will receive a lock-in token on a 1:1 basis, which can be used for the DAO voting (board elections, board votes, community proposals and proposal referendums). In addition, participation in governance can have governance incentives and DAO staked voting proceeds. At the same time, the liquidity of the locked-in pledged MDX is not lost, with users holding locked-in vouchers and participating in IMO, etc.

This setting allows both the Mdex DAOs and Mdex to enter a better virtuous cycle. DAOs have the same long-term goals and consensus and short-term investment returns for planning a better future for the Mdex, which in turn will benefit the DAOs and the Mdex community.
What can Mdex DAO manage?
As a good blockchain application, the Mdex DAO will have the right to vote on matters related to Mdex, large or small.
The Mdex DAO is made up of a Boardroom and ordinary DAOs. The Boardroom is voted in by the DAO members and will re-vote on a monthly basis. The Boardroom has the power to post proposals for voting. Such a mechanism helps to improve the efficiency and quality of the DAO.
Mdex is no longer an ordinary DEX, but rather a growing ecosystem. Both the IMO functions, the derivatives under development, and the newly-released Hunter development plan will promote the development of the Mdex ecosystem.
As such, the token held by Mdex DAOs will not just be tokens for Mdex’s current DEX products, but will also be tokens for the entire ecosystem. It will be able to manage matters far beyond trading rates, mine pool adjustments, IMO project selection and other usual DEX matters. Its value will grow as the Mdex ecosystem grows. 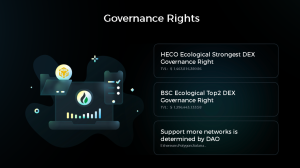 Mdex DAO participants can also withdraw their tokens and use them to expand the Hunter plan at the community level to continue to develop the Mdex ecosystem.
The economic base determines the superstructure which will affect the economic base in turn. Mdex DAO and the Mdex will complement and promote each other in a decentralized way for better development.
Post Views: 67